I am consistently wowed and humbled by all of the ridiculously cool culinary folk that I have had the pleasure of meeting via Spice or Die (formerly Adesina’s Kitchen).  It all started as a complete and total guilty pleasure – rather than jot down my successes in the kitchen in my little notebook, I’d shoot them, post them and share the process online for the few friends that might be interested.  Well, the friends were a lot more than a few and the definition of friend quickly expanded to include folks from around the globe.  It was an exciting connection that was made without my anticipation that it would turn out as such.

One such friend is fellow food blogger, Devaki Das of Weave a Thousand Flavors.  We “met” through a web community of food bloggers called FoodBuzz and found that our love of global flavors and culinary tinkering was a shared passion.  Her work is so revelatory and timely and necessary that I featured her in a guest post on my blog, along with her recipe for Roasted Apple, Brie and Thyme Soup.  Dev recently passed on to me a distinct honor – to participate in “The Seven Links Project”.  After being nominated herself, she had to answer seven questions about her blog posts and then pick 5 bloggers to pass on the proverbial torch.  Here’s my stab at it – hope you’ll enjoy this trip down memory lane with me.

Mini Beef Wellington with Morel Bearnaise and Melted Leeks
This post was incredibly enjoyable to cook – my buddy Karen and I were attempting to win the Marx Foods Morel Mushroom Competition and had the opportunity to cook rather lazily with no pressure to get food on the table.  Typically we cook ambitious menus and invite a sizable group of folks over to eat the results – the good being that we have tasters on hand, the bad being that there’s an expectation that we’ll be hostesses and get everything to the table in a timely fashion.  This particular day, we puttered around the kitchen on our terms, and it really showed in the final result.  The photos were gorgeous and I didn’t have to worry about anyone nibbling off the photo plate while I tried to get a pic.  Not to mention the fact that that was the day I first cooked a leek that made me weep with joy – usually they are “eh” but the creamed ones in this recipe left me grinning from ear to ear. 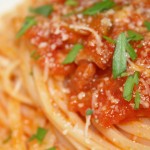 Spaghetti all’Amatriciana
This recipe could have easily been in the “Most Controversial” category as well for my use of wine in the sauce and the comments from Italians cringing at my handiwork.  Or that I used spaghetti instead of bucatini, the traditional pasta used for this dish.  It was a tough go because this recipe was crafted on the nostalgia of the little mom-and-pop shop that used to make this for me when I lived in Orvieto.  The love of the dish and my fondness for my time there must have shown through, because this was resoundingly my most popular recipe – not only for this year, but in all the time that Adesina’s Kitchen has been up and running.  The perfect combination of bacon, tomatoes and spaghetti to suck up all the glorious sauce was enough to rake up the hits for this one. 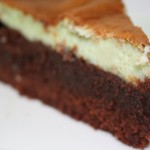 Nyquil Brownies
I did think before posting this one that I’d get in trouble for the use of cold medicine in baked goods, but I took the plunge as the actual brownies are amazing – they taste almost like an Andes mint in cheesecake brownie form.  I crack up that these are now intrinsically linked to my best friend’s mom (who created the brownie recipe) in that she would NEVER put Nyquil in her brownies (or any baked goods for that matter).  I also get plenty of questions from folks every time I serve brownies whether I’ve “laced” the batch or not.  It’s like the scene in EuroTrip where the kids think they’re eating hash brownies and flip out, only to find out that they just had plain ‘ol brownies.  I’d say that I make the plain creme de menthe and peppermint extract version more than the Nyquil version.  Still, if you’re home and no one has to operate any heavy machinery, maybe give the real version a try, controversy be damned. 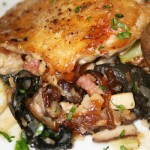 Chef Tim’s Roast Chicken with Chardonnay Sauce, Trumpet Mushroom Duxelle and Fingerling Potatoes
It’s common knowledge that Tim Ma is in the stratosphere in terms of the heights of his awesomeness.  I’m not building him up – his skills in the kitchen are methodical, artistic and forward-thinking.  Thought I’d eaten his cooking at his place, Maple Ave Restaurant, I’d never cooked from one of his recipes before.  The process of cooking a recipe that’s voiced by someone you know personally is a little surreal – you can literally hear their voice guiding you, and your successes and failures all have a face that they can be directed at.  It was no surprise that Tim’s recipe had me moving through the kitchen in a way that I love and don’t always have the opportunity to do – I felt confident in all the techniques and steps and also in his measurements and ingredients.  I call shenanigans a lot on others recipes, but not this day.  Best of all, I cooked for just my husband and I, and when I laid the plates on the table, it felt like a gift – my hard work and Tim’s ingenuity had produced an extraordinary feast, but also gave me new insight into his sheer skill as a chef. 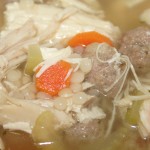 Chickarina Soup
My buddy Tara of the food blog What We Chow always says that the best way to engage an audience online is to include them in the process.  I am 100% sure that the reason that this recipe was so successful was because of the fact that there wasn’t really any other hack recipe for Progresso Chickarina Soup out there, but a ton of folks who loved the soup and were looking for a way to make it themselves.  This recipe wasn’t at all complicated and the results humble, but it flew in hits from people finding it in Google searches.  I hadn’t expected that there would be such a clamor and fuss for it, but alas… 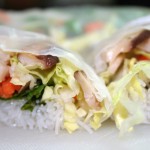 Vietnamese Summer Rolls
I never figured out why this recipe, based on hits, seemed like a clunker.  It wasn’t a terrible photo and the actual recipe is hella versatile – you can make it for vegans, vegetarians, pescatarians and locavores alike with NO extra work.  Better still, you barely have to turn your oven on to make them.  Maybe there were a lot of competing posts the week that they came out?  Or a lot of other similar versions available on other more popular sites?  Still, this one seemed to get no love.  No matter – for some reason these rolls are one of my most popularly requested dishes from friends in person, so I’ll just keep on making them for people I know personally  and call it a day. 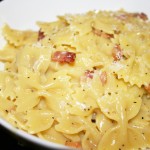 Pasta Carbonara
My very first post, I have a lot of love for Carbonara and where it’s taken me.  It doesn’t take me very long to start talking about food when I first meet someone, and once I get on the topic, I’m quickly referencing my grandmother and her influence on the way I cook and why I am so unabashedly obsessed with cooking and crafting recipes.  This blog was born of this post, and it happened on a night when, as I doled out portions of farfalle from the pot, I thought, “Hmmm.  This would make a lovely picture.”  I’ve grown a lot in my methods in the kitchen over the past few years of blogging, but I love that I’m still that same girl making carbonara for those close to her, blissful in her determination to keep the eggs from scrambling in creating the perfect bite.

So half the fun of this is that I get to then turn this over to five fellow food bloggers.  I thought I’d pick bloggers that a) I’d never met before and b) managed to inspire me on a regular basis with their crafty ways in the kitchen and stunning photography.  If my work was half as good as theirs, I’d be a smitten kitten.  Until then, I’ll let them keep on inspiring me 🙂

Here are their names and sites to look at:

4 thoughts on “The Seven Links Project”


Oooh, so baby let’s get it on // Drinking wine and killing time // Sitting in the summer sun